Please give us a description of your intellectual and/or creative background and tell us what brings you to The EGS. Please include in this account a sketch of the creative or intellectual movements from which you have taken particular inspiration and cite relevant authors or artists and works.

The art that has fundamentally changed my life, shifts how I exist in the world. It broadens what I thought possible or named something I could not fully grasp. These works have revealed not simply the complexity of human relations but also the contradictions of my own interior world. Many times it arrives in a medium that is not particularly comprehensible to me. My first response is often fiercely negative. I don’t understand what is being presented. Often I am bored or become physically uncomfortable. The maker is forcing me to work. I have to pay close attention, read faces, think. I often have a strong urge to run away. Then, if I’m lucky, something clicks in. Out of this tangle an opening is created and I am hooked into a deeply nurturing source. The medium is unimportant. It could be a film by Cassavetes, a theater piece by Mnouchkine, Mingus on bass, a painting by Phillip Guston. I’ve read Audre Lorde’s essay The Transformation of Silence into Language and Action dozens of times or the writing of Adrienne Rich or James Baldwin. Suddenly the noise of daily life goes still before something much more powerful and clean and true.

I grew up in a world of active engagement. What was for my parents generation a rebellion seemed to us, their children, the natural order of things. We were constantly in motion; protests in the streets, art happenings. At the dinner table discussions raged on politics, art and love. The political was intimately entwined with the personal as the adults around me were experimenting with sexuality, drugs and consciousness. It seemed that day by day, year by year we were forcefully moving forward. I fully believed that I was growing up into a society just on the brink of social justice and equality.

From the vantage point of my middle years the view is quite different. As I came of age, Reagan was elected president and what seemed like an inexorable march forward began, inexplicably to me, to quickly slide backwards. Civil rights, reproductive rights, even simple compassion seemed to recede into a fog of greedy individualism. I was living in one age but seeing and thinking from another. What I had thought was inevitable progress had only been a moment of a much larger and more complex engagement.

The central question of all the work I make is this: What makes it possible for people to move from the inner realm of thought, dream or feeling to the exterior world of public action?

How can we create experiences of agency that build the muscles necessary for civic engagement? What kinds of works tease out the delicate mix of vulnerability and unexpected strength, as we cycle from a frozen state, vibrating between personal and political distress, to moments when we cast off the world as it is presented to us to surge forth trusting in our own instincts and possibilities to boldly assert our presence, our voice, our will?

I am inspired by large scale projects by artists who work with the public. Peter Watkin’s film Paris Commune 2001 was created with 200 people he took to a warehouse on the outskirts of Paris. There they built their own version of the Commune, exploring history and contemporary conditions to create the nearly 6 hour film. Choreographer Bill T. Jones used movement workshops with people with terminal illnesses as the basis for Still/Here. Maryat Lee who in 1970 left behind her acclaimed street theater productions in New York City to return to rural Appalachia. There, she developed ‘EcoTheater’ creating with the country communities in which she spent the rest of her life. These diverse works don’t share a medium, a set work process or even a world view but they all engaged with the public in innovative ways.

My work over the years has grown from fiction films made with communities to large scale public interventions. Each project has expanded and redefined the traditional roles of maker-subject-viewer. Growing from small intimate works to nationwide projects involving hundreds of people. In 2011 two of my projects (Chalk/Remember the Triangle Fire Coalition, Voices of 9.11) came to fruition. I was completely burned out and leapt at the opportunity to move to Berlin. I was fortunate to be asked to write a book about my work for the University of Iowa Press. Writing the book gave me the opportunity to step a bit outside my own work. To definite more explicitly how my work process had developed. But also to begin to clarify the ways in which I want that to change. See You in the Streets, comes out in June and is a summation of my work so far.

Now, I am ready for something new. I want to attend EGS because I am looking for a different kind of conversation. In the past my projects created a home for discovery and exploration but something is shifting. Living in Berlin has expanded me in unexpected ways. I’m keen to continue to make the work but I also find that I am facing fundamental questions. Its an instinct but I know I need to be stretched in ways that I can’t do on my own. I am hungry for a community in which I can grapple through to something deeper, truer for the work that is coming next.

And there is a solace if we dare believe it. The creation of beauty or art out of even the greatest of tragedies is in some manner the only way we can bear history. -Bill T. Jones

The work samples comprise a short tour of the development of my work, illustrating the growth from intimate community based projects to large scale public interventions. Each experience expanded outwards the traditional roles of maker-subject-viewer and my growing technical palate from traditional 35mm film production to emerging technologies.

(Fiction Film, 2004)
My films were created with communities whose participation as actors and advisors shaped the heart of the work. Belle was made with a group of 80-92 year old women through an intensive workshop process involving theater games, improvisation and discussion.
As my work matured, I became aware of an inherent contradiction: while I hoped my films might create a transformative experience the for the audience, the model for their participation was to remain silent and still in the dark. I was inadvertently rewarding them for passivity.

As a native New Yorker I was stunned and saddened on September 11, 2001. The deluge of corporate mass media and government insistence on American Exceptionalism effectively censored more open inquiry into both the experience, its causes and meaning.
I created Voices of 9.11 to insist on the people’s right to tell their own story. In 2002 inside a private booth over 550 people recorded their testimony to video utilizing technologies that were just becoming available. There were absolutely no restrictions on what could or could not be said. At a time when the language to describe the experience was still being formed, we traveled from New York City to Shanksville, PA, Washington DC and inside the Pentagon to create this people’s archive.

In 1911 the Triangle Factory fire took the lives of 146 workers, most of them immigrant women and girls, and galvanized a movement for social and economic justice. In 2004 I created Chalk, each anniversary of the fire participants fan out across the city to inscribe the name and age of the Triangle Workers in front of their former homes. It is a memorial that only exists if in fact each year the workers are remembered and members of the public are willing to make a public act. Inspired by the diversity of participants in the project I founded the Remember the Triangle Fire Coalition. Over a three year period, the Coalition grew into a national network of over 250 partners nationwide creating hundreds of educational, artistic and activist actions across the country.

In 2011 I moved to Berlin. After the thrill and exhaustion of the Triangle Centennial and releasing all the Voices of 9.11 testimonies online, I was grateful to be able to work on more intimate projects. Each scene of the interactive installation builds on the audiences physical participation to question our place in history and individual accountability. Alice lures us into a topsy-turvy world where 19th century images collide with iconic moments of the 20th century. In front of the looking glass, fantasy and reality merge as Alice fluidly mirrors the viewer’s every move. A surreal landscape leads to a contemporary world of global change. Alice disappears and we land firmly back in contemporary Berlin

See You in the Streets:
Art, Action + Remembering the Triangle Shirtwaist Factory Fire

The invitation by the University of Iowa Press to write a book about my projects gave me an opportunity to explicitly describe the processes I have developed over years.

Please read the Introduction to See You in the Streets. 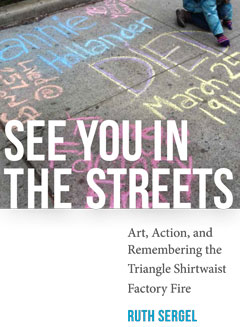