What I am doing right now…

Hope is a discipline
– Mariame Kaba

Somehow Chalk felt particularly vital this year. Heartfelt thanks to the many chalkers, experienced and new, who reflect a model of a community of care. You can see some the beauty here.

Currently working on making the entire website accessible – captioned videos and alt text for all still images. Apologies it has taken me this long but I should have it done shortly. One of the most powerful articles I’ve read this year is You Are Not Entitled To Our Deaths: COVID, Abled Supremacy & Interdependence. Please check it out and share if you have the time. 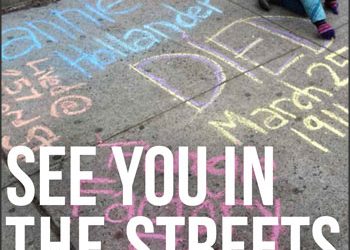 See You In the Streets

What makes it possible for people to move from the inner realm of thought, dream or feeling to the exterior world of public action?

See You in the Streets offers an exuberant perspective on an art practice which explodes out the boundaries of traditional mediums to create experiences of agency as an incitement to individual and social transformation. 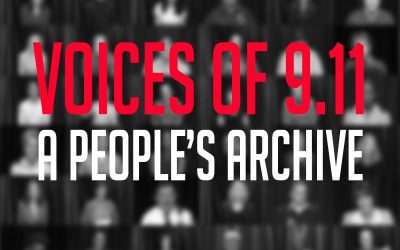 Voices of 9.11 is a collection of over 500 video testimonies recorded in 2002-2003 in New York City, Shanksville, PA, Washington D.C. and the Pentagon. At a time when language to describe the event was still being formed, the project was explicitly designed to give each individual agency over the story of their own lived experience. 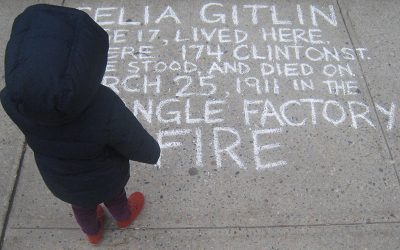 On 25 March 1911 the Triangle Shirtwaist Factory fire took the lives of 146 workers, mostly young immigrant women and girls, and galvanized a movement for social and economic justice.

Each year since 2004, on the anniversary of the infamous blaze, volunteers fan out across the city to inscribe in chalk the names and ages of the Triangle dead in front of their former homes. The chalk will wash away but the following year we return, insisting on the memory of these lost young workers. 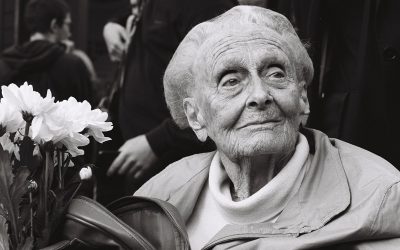 Through animation, photographs and found objects, Tikkun Olam is a walking cinema of the experience of moving to Germany as a Jewish person, the rise of Trump and facing uncomfortable questions about Israel/Palestine. 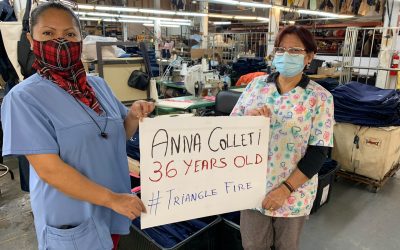 A collaboration for the 2021 virtual union commemoration of the Triangle Shirtwaist Factory fire. The video includes voices of essential workers and Triangle family members. The story of the fire + the 1982 Chinatown garment workers strike. Music and 146 workers, organizers, compassionate public servants, artists and friends, each holding the name of one of the workers. 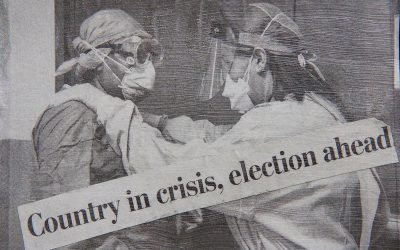 How to digest the news in a pandemic?
Cut it up + revise
(more soon) 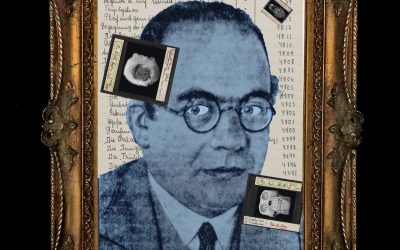 An interactive cabinet of wonders created from the collections of the University of Hamburg. 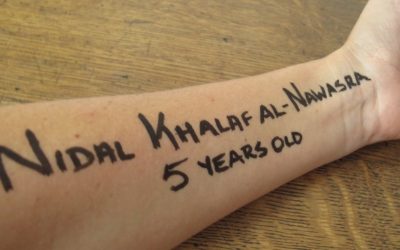 A response to Operation Protective Edge/the destruction of Gaza, summer 2014.
Re-up for the 2018 Great March of Return 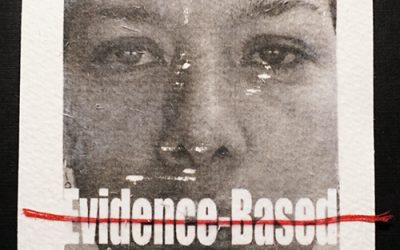 "The Trump administration is prohibiting officials at the nation’s top public health agency from using a list of seven words or phrases — including “fetus” and “transgender” — in official documents being prepared for next year’s budget."
-Washington Post (15 December 2017) 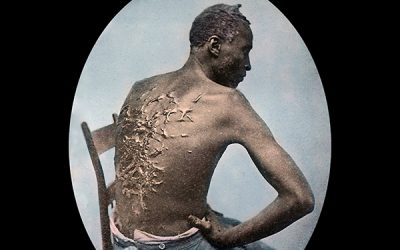 52 cards (a full deck) created between the 2016 Electoral College vote and the 2017 Inauguration of the 45th President of the United States. Collect the full set! 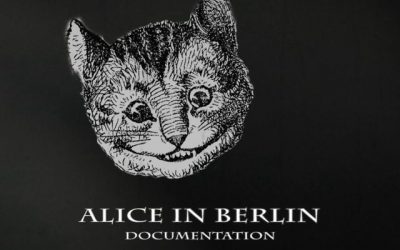 Alice in Berlin slyly evokes our fantasy of childhood innocence to lead the audience on a hallucinatory trip into today's global chaos. Each scene of the interactive installation builds on the audiences physical participation to question our place in history and individual accountability. 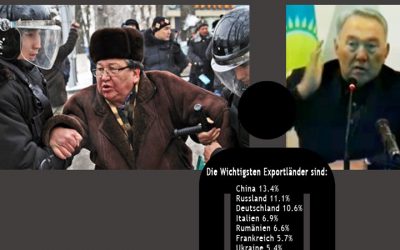 Commissioned by theater director Bulat Atabayev of Kazakhstan, Zhanaozen was created for the one year anniversary of the massacre of striking miners. The interactive documentary reacts to the viewers’ physical movement to upend state media, revealing evidence of the slaughter and the protests that followed. 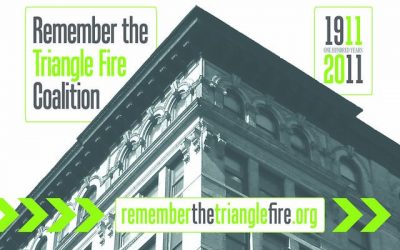 In anticipation of the 2011 Centennial of the infamous fire, Ruth founded the Remember the Triangle Fire Coalition. Over a three year period, the Coalition grew into a national network of over 250 partners who created hundreds of educational, activist and artistic actions across the country. 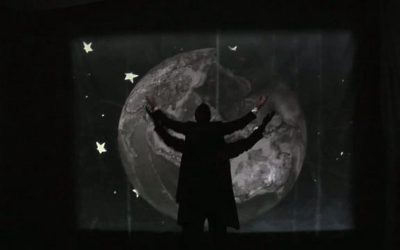 Alchemy of Light melds 19th century illusionism with current interactive technologies to depict the life of the legendary magician Torrini as a parable from a time when our lives first became mediated by machines. 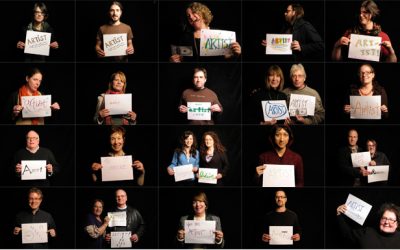 Who does more for America -
banks or the arts??

Tired of writing those grants? Juggling day jobs? There is another option!

Join the movement to make the case -
We're too big to fail! 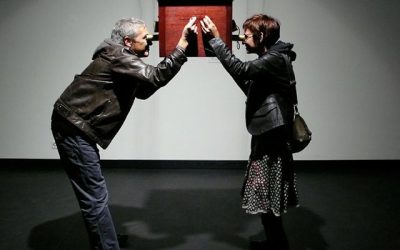 Magic Box melds 19th century illusionism with current technologies in the guise of a pre-cinema device. The Magic Box mirrors our current confusion about human connection with the 19th century hope that emerging technologies might at last allow us to breach the life-death divide to see our lost loved ones once again. 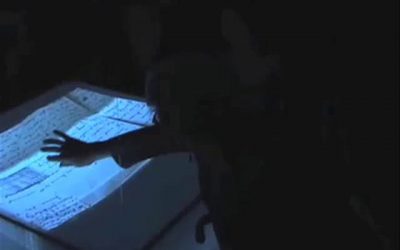 Viewers enter a room where Ethel sits quietly at a dining table. Raising her hand, the table becomes a projection surface. Her movements triggers clips from her life story. The audience is invited to move their hands across the table to learn more about Ethel. 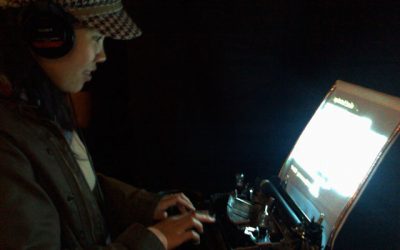 Turing Machine utilizes a re-purposed typewriter as a model Turing Machine to depict the life of Alan Turing, the father of modern computing. Reknowned for his role in breaking the infamous Enigma code during World War II, Turing was later persecuted for his homosexuality. 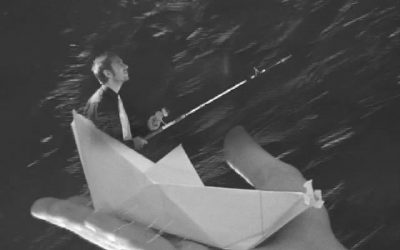 An international collaboration created at CESTA in the Czech Republic. 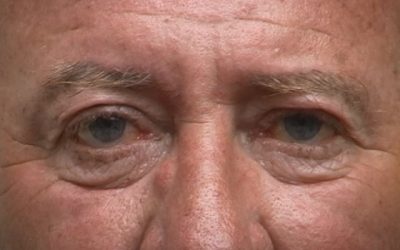 A portrait of homeless artist Alfred Carlo based on his stories and paintings. The audience moves physical objects which reveal the documentary of Al's multifaceted life as painter, vet, raconteur and man of the street. 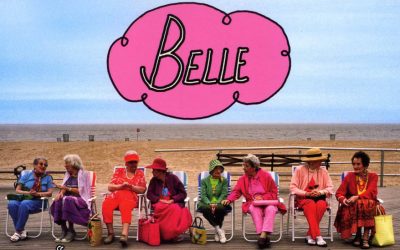 Belle is a subversive fable of old age and beauty. The film was made with a community of 80 - 93 year old women whose participation as actors and advisors shaped the heart of the work. 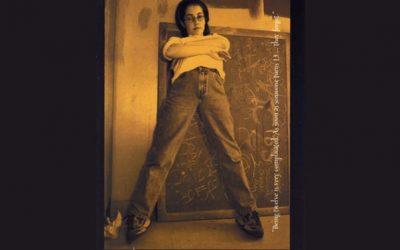 There is an electric moment for girls as they leave behind the bold egoism of girlhood for the shaky dislocations of adolescence. Cusp is a fiction film created with a group of 11-12 year old girls hitting the wall of early adolescence.

A duet for camera + dancer that challenges expectations of grace and disability.

Thank you for looking | See you in the streets.